In 2014-15 a group of students worked with Alf Siewers on a video documentary project about French Azilum and Joseph Priestley. The documentary, called “Utopian Dreams”, focuses on the aspirations of two separate communities to create their ideal societies. This documentary is beneficial not only for the students who created it but also for the community; they have both worked together in order to showcase the narratives that surrounded the Susquehanna River. The documentary was aired on the PBS station WVIA in Spring 2016. You can watch the documentary on the WVIA website here: 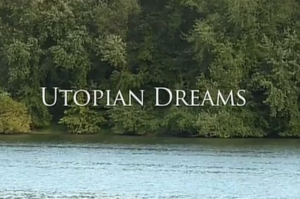 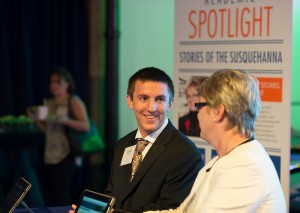 On September 19 Katie Faull and her research student Henry Stann (’17) presented their work on the Stories of the Susquehanna at the Bucknell “We Do” campaign event in Chicago. 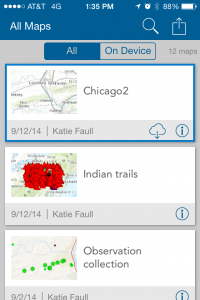 Katie talked about the importance of interdisciplinary, cross-institutional, and community collaboration for the Stories of the Susquehanna project, and presented GIS research that she is currently developing using ESRI’s new mobile Collector for ArcGIS, to discover new ways for people on the river to learn about and share information about the Susquehanna watershed in real time.

Henry demonstrated the ways in which he has been experimenting with augmented reality applications like Layar to find new multimodal approaches to telling stories about the Susquehanna.

Alfred K. Siewers developed the courses Visions of the Susquehanna as part of the Bucknell on the Susquehanna program in 2011, and it examined how early American views of nature developed along the Susquehanna River. Students explored how James Fenimore Cooper’s famous cycle of novels The Leatherstocking Tales (best known for The Last of the Mohicans), and what is considered the first published book of nature writing by an American woman, Rural Hours, by his daughter Susan Fenimore Cooper, reimagined the source of the Susquehanna River in the early nineteenth century. By writing literary landscapes to fill the perceived cultural vacuum left by an earlier era of Indian removal, they also contributed to a critique of American subjugation (in the name of what became known as Manifest Destiny) of both nature and native peoples. The course also compared the elder Cooper’s literary perspectives on nature with those of two famous contemporaries also associated with the Susquehanna, the English Romantic poet Samuel Coleridge and the scientist-clergyman Joseph Priestley. In addition, it included a comparative reading of Susan Cooper’s “Rural Hours” and the contemporary “Walden” by Henry David Thoreau. Students considered the legacy of the Coopers’ writings on American views of nature, including the Leatherstocking Tales’ influence on figures such as Theodore Roosevelt and his establishment of America’s National Parks. Their readings included perspectives from environmental criticism (ecocriticism) and environmental philosophy, which helped identify early evidence for a subversive tradition in American nature writing. Course activities included a field trip to Cooperstown, NY, and Lake Otsego, to connect readings with the area in which they are set, and discussion with conservation groups on the books’ continued influence on environmental efforts in the Susquehanna Valley
Schedule

Week 1, 8/25
Introductions and The Deerslayer

Week 7, 10/6
Rural Hours and Walden: The Sublime and Transcendentalism
First Essay draft due, 10/9

As Bucknell welcomes students to campus this month, Stories of the Susquehanna associated faculty and staff will be teaching courses related to SSV, while they mentor student researchers on special projects.

Katie Faull (Comparative Humanities) is teaching a new course, HUMN 100, “Digging into the Digital” in which her students will engage in research-based learning focusing on the Shamokin Moravian Diaries using the latest Digital Humanities tools and approaches. She will also be working with Henry Stann ’17 and Alexa Gorski ’16 as they continue to map the West Branch and experiment with new forms of visualization and augmented reality.

Alf Siewers (English) is leading a group of students as they complete work on a documentary on Joseph Priestley and French Azilum.

Next spring Faull and Siewers will teach an Integrated Perspectives course entitled “Digitizing the River,” a completely redesigned course based on Susquehanna Country

Take a look back at previous curricular work associated with SSV:

Also, here’s a peek at the kind of unique experience students enjoy in SSV-related courses.