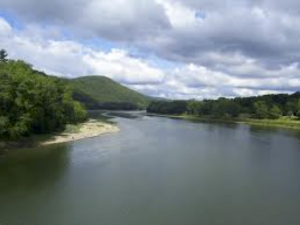 The Stories of the Susquehanna Valley began as a unique research project focused on a watershed, utilizing multimedia scholarship to articulate, highlight, and learn from stories that form our region, our communities, our ecosystems, and ourselves. This long-term collaborative project in environmental humanities, community studies, and natural history focuses on the question of what constitutes an eco-region as a confluence of cultures and ecologies. It already has helped achieve designation of the Susquehanna River as a national historic corridor. The project emerges from a decade of planning, and longer-developed expertise, by scholars at educational institutions in the Valley, in collaboration with leaders of Native nations, community members, and undergraduate researchers. It involves partnerships with the Susquehanna Heartland Coalition for Environmental Studies and Susquehanna Colloquium, the Haudenosaunee (Iroquois) Environmental Task Force, the Chesapeake Conservancy, Envision the Susquehanna, and faculty from Bucknell, Bloomsburg University, the University of Buffalo, SUNY Binghamton, among others.

The Stories of the Susquehanna book series, published by the Bucknell University Press, includes two volumes that appeared in 2013: Native Americans of the Susquehanna Valley by David Minderhout of Bloomsburg University, and Coal Dust on Your Feet by Janet McGaffey of Bucknell. Future volumes planned include Katherine Faull’s translation and study of the Moravian diaries of Shamokin, a natural history volume by a team of scientists led by Duane Griffin of Bucknell and Mark Blumler of SUNY Binghamton, The Coopers, Coleridge, and Priestley: Re-Defining Nature on the Susquehanna Frontier by Alfred K. Siewers, and a volume on Susquehanna rivertowns co-edited by Ben Marsh, Janet Jones, and Brandn Green. Many of these volumes will include dynamic online companion content such as GIS maps, geo-stories, and videography.

DIGITAL ATLAS OF THE SUSQUEHANNA VALLEY

This collaborative digital project seeks to interpret and articulate aspects of the region from cultural history to natural history, linking various scholarly projects. It includes GIS, visualization of stories through text and imagery, and development of accompanying videography from oral history interviews to documentaries. To provide an historical base map, Bucknell faculty and students, coordinated by Prof. Katherine Faull, have been using the ESRI ArcGIS suite of mapping tools to build multiple data layers about historical places in the Valley. 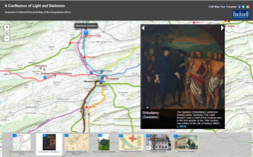 Using primary and secondary sources, including historical maps such as the 1612 John Smith map of the Chesapeake Bay (top left), many students have been involved in the production of an historic base map. Working closely with LIT staff and a series of undergraduate students, Prof. Katherine Faull has developed a variety of geospatial approaches: Emily Bitely ’11 used GIS to georeference early maps, including the Smith map, to present-day town locations on the river; Steffany Meredyk ‘14 (drawing on work with Prof. Duane Griffin) built  pilot online interactive web map applications through ArcGIS Online. Most recently, Alexa Gorski ’16 has been focusing on mapping the West Branch in GIS, while Henry Stann ’17 has been experimenting with new mobile applications to map cultural and historical features of the valley.  These different approaches to GIS mapping continue to reveal valuable features of our region.

Projects on Joseph Priestley, the Pantisocracy, French Azilum, and the Headwaters, coordinated by Prof. Alfred K. Siewers focus on mapping and producing documentaries and scholarly research to connect the legacy of foundational 19th-century cultural projects on the North Branch with conservation and land use today. Students Sam Lauer ’13 and Abi Mills ’13 have researched and worked on mapping and video of the legacy of James Fenimore and Susan Fenimore Cooper at the Headwaters. Students Courtney Nelson ’15 and Drew Picketts ’14 have worked on mapping and video of the legacies of the utopian Pantisocracy project (associated with Joseph Priestley and Samuel Coleridge) and French Azilum. A new group of students is extending the work, which will culminate in a scholarly book with student and community collaboration, as well as geo-stories.

Funded in part by William and Madeline Morrow, and coordinated by geographers Duane Griffin of Bucknell and Mark Blumler of SUNY Binghamton, the SSV Natural History Project involves a group of distinguished scientists working on digital- mapping terrestrial and aquatic life, geology, and hydrology in the Susquehanna watershed, while also producing a book that will be the first-ever complete illustrated natural history of the valley, with the goal to be “as beautiful as it is informative.”

Profs. Ben Marsh, Carl Milofsky, and Brandn Green, with other community and scholarly collaborators including faculty from other institutions, are developing projects on Susquehanna river towns for mapping and geo-stories, and eventually a book collection. Dr. Green and students have begun work on more detailed mapping and potential geo-stories on the West Branch and its tributaries.

Susquehanna Country students have class on the river

A co-taught course “The Susquehanna Country” involved related student research and mapping projects in 2012, and will be offered again in the 2014-2015 academic year at Bucknell, by Profs. Katherine Faull and Alfred K. Siewers, who have also developed other courses from Stories of the Susquehanna subjects. Other courses involving SSV are regularly added to the curriculum. In addition, aspects of the Bucknell on the Susquehanna program courses have involved students with SSV as undergraduate researchers with the river as a classroom.

SSV involves faculty partners from institutions including Bucknell University, Bloomsburg University, SUNY Binghamton, and Wilkes University, as well as partner organizations such as the Haudenosaunee Environmental Task Force, the Susquehanna Heartland Coalition for Environmental Studies, the Chesapeake Conservancy, and Envision the Susquehanna . Its faculty have received support for related projects from sources ranging from the National Endowment for the Humanities to the Luce and Mellon Foundations. It involves digital scholars and staff at Bucknell’s Library and Information Technology Department as well as undergraduate and graduate students from Bucknell and other institutions. Chief Sid Jamieson has been a key partner in developing relationships between the project and leaders of the Haudenosaunee (Iroquois) Confederacy.