Europeans, Native Americans, and the Susquehanna 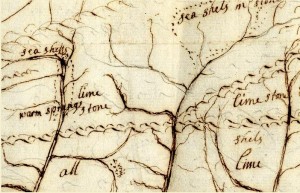 Detail from John Bertram’s map of the Susquehanna (1742) showing the presence of seashells on the mountains of Central Pennsylvania. This discovery convinced the botanist of the truth of the Biblical story of the flood.

In the Fall of 2011, Katherine Faull introduced a new course into the Comparative Humanities program, entitled “Nature and Enlightenment: Europeans, Native Americans and the Susquehanna.” This interdisciplinary course examines the interconnectedness of Enlightenment notions of what it means to be human, what it means to live in nature, and how the two interacted on the Susquehanna River. The course examines the moments of shared vocabularies of existence between the Native Americans and Europeans, especially as they pertain to Nature, the environment and the human body as a way to highlight the other path that might have been taken in the European settlement of this land.
Starting with an examination of European concepts of the Susquehanna, as provided in narratives by Crèvecoeur, Goethe, Bartram, and Zinzendorf, the course will move to artistic representations of the Susquehanna—by Valentin Haidt, Benjamin Cole, and the Hudson school. American landscapes, considered sublime in their “wild” beauty, were objects of both awe and conquest in the European project of expansion and colonization. So the course will also examine the history of the Native American peoples who lived along the Susquehanna in the contact period. We will read Iroquois and Algonquin cosmologies, extant historical records of Native concepts of Nature and landscape, and the relationship between the two. In light of 18th century American notions of the human body that revolved around the important influence of the environment on the nervous and vascular systems of the new political subject the course will also examine the interrelationship of European and Native medical knowledge. The course concludes with an examination of representations of bodies and space, using GIS and Google Earth in a personal mapping project.

Week 1
Trip to the Confluence and visit to Hunter House museum
Read: Susan Stranahan, Susquehanna, River of Dreams, (Baltimore: Johns Hopkins UP, 1993), Chapter One “Geology”.
View: Looking to the River
Journal assignment: Make a hand drawn map of our trip today. Note down on the map what interests you about the river and its environment/history/culture. You can embellish this with narratives..

Week 2 Confluence of Cultures
Discussion: European notions of the Susquehanna and its inhabitants. How is this area viewed by Europeans such as Count Zinzendorf, John Bartram, Frederick Pursch? How have these descriptions colored the area since?
18th Century Maps of the Valley: Shippen, Bartram, Scully…
Texts: Nicholas v. Zinzendorf, “Narrative of a Journey from Bethlehem to Shamokin, in September 1742” in Count Zinzendorf and the Indians 1742 ed. William Reichel (rpt. Lewisburg: Wennawoods Publishing 2007), pp. 62-99. Poems by Christian Gregor and Johann Wolfgang von Goethe (trans. K. Faull). John Bartram, “Journey to Onondago 1743” (selections)
Questions to think about: You have all lived on the banks of the river for a year or so. What is your experience of the river? Can you find your way to it from your dorm room? Do you ever go out on the river and kayak? Swim? Fish? Why/not? Why do you think the university has constructed a dock? Do you know where it is?
For week 3
Read:,James Merrell, “’Shamokin, ‘the very seat of the Prince of Darkness’: Unsettling the Early American Frontier”. In Andrew Cayton and Fredrika J. Teute, eds., Contact Points: American Frontiers from the Mohawk Valley to the Mississippi, 1750–1830. (University of North Carolina Press, 1998, 16–59).
—, “Shikellamy. A Person of Consequence” in James H. Merrell, Robert S. Grumet ed., Northeastern Indian Lives, 1632-1816, (Amherst: University of Massachusetts Press, 1996, 227-57).
John Mohawk, “The Creator’s Way” and “Iroquois Land Claims” in Thinking in Indian, pp. 3-6 and 182-187.

Week 3 People and Place: The Confluence for Native People and Europeans
Discussion: What kind of place is Shamokin in the 18th century, as described by James Merrell? Which preconceptions about European and Native contact does his article address? Are you surprised by his conclusions? What is different about Shamokin than other Native settlements? What kind of leader is Shikellamy? Are there notions of Native space and connections to the land that highlight the dilemma that Merrell touches on in his chapters?
Questions to think about: What is your experience with diverse groups of cultures and ethnicities? In your hometown or here at Bucknell, how do different cultural, linguistic, ethnic groups conceive of their space, especially as it borders on others’? How would you draw a map of your spacial experience at home or here on campus? How are your borders drawn? What markers are used to delineate your space? Do you know of places like Shamokin in the 18th century? Maybe Times Square?
Journal assignment: After the trip last week you may have had certain preconceptions about the concept of the “frontier”. Have they changed at all? Try to make a map of the West Branch that does not use frontiers/borders.
For week 4 read: Edward Casey, Representing Place: Landscape Painting and Maps, Introduction and Chapter 1; Immanuel Kant, Observations on the Beautiful and the Sublime (selections); Visions of the Susquehanna: 250 years of paintings by American Masters; James Merrell, “Into the American Woods” Introduction

Week 4 Mapping the Past: Painting Landscape
Discussion: How do the practices of cartography and painting reflect the notions of the sublime and the beautiful in the 18th century? Using the examples from last week’s class of maps and augmenting them with the landscape paintings of the Susquehanna from the members of the Hudson School, we will question representations of the space of the Susquehanna. How do Kant’s influential concepts of racial and gender hierarchies inflect his pre-critical concepts of the beautiful and sublime? Beethoven’s Symphony No. 6 “The Pastoral”
Questions to think about: What do you think about Casey’s argument on representation and space? Can you conceive of gendered representation of space? What would it look like?.
Journal assignment: Try to create a map or representation of your personal space/place that reflects Kant’s categories of the beautiful and the sublime. For example, what emotions does your represented place evoke in a viewer? “Finer feelings, enjoyment but with horror, Night, Eternity, Disdain for the world? Does it make them earnest, sometimes rigid and astonished”? Or, a pleasant sensation with joy and smiling, Day, The Beautiful charms you, “cheerful, smiling, and mirthful”.

Week 6 Native Space—Iroquois and Delaware notions of space and identity
Discussion questions: Whereas the European notion of space and territory revolved around concepts of ownership and measurable space, Native notions had far more to do with usage, navigation, and negotiation (both with other Nations and with Nature and the Manitou itself). How did and do Native people represent space?
Images: Petroglyphs at Safe Harbor; maps of the path to Onondago by Spangenberg, Bartram, etc,
Questions to think about: Can you think of a clash of cultures that could be better understood through realizing the divergence in conceptualizations of space? What do you think of the experiential maps developed by the authors of the works we looked at this week? Play with the deep mapping website for a while…
2 Night Trip to Cooperstown and Onondago—depart Friday Sept 29 and return Sunday October 2
For week 7 read; Colin Calloway, New Worlds for All: Indians, Europeans, and the Remaking of Early America, (Johns Hopkins, 1997), Chapter One; Native North American Spirituality of the Eastern Woodlands Indians: Sacred Myths, Dreams, Visions, Speeches, Healing Formulas, Rituals and Ceremonies, ed. Elizabeth Tooker (selections); Anthony Wonderley, At the Font of the Marvelous: Exploring Oral Narrative and Mythic Imagery of the Iroquois and their Neighbors, (Syracuse, 2009) (selections); John Mohawk, Thinking in Indian selections

Week 7 Native American Cosmologies
Discussion questions: What are Iroquois concepts of the human relationship with the land? Where do we stand in the cosmos? And how were these notions challenged by the entry of the European into Native worlds.
Questions to think about: From the trip last weekend to Cooperstown and Onondago: what is your experience of space? Describe how the Haudenosaunee think about land and stewardship.
Paper Two: Response to trip to Onondago
For week 8 read and discuss: Sarah Knott, “Benjamin Rush’s Ferment: Enlightenment Medicine and Female Citizenship in Revolutionary America” in Women Gender and Enlightenment, eds. Sarah Knott and Barbara Taylor, pp. 649-666. Iroquois Medicinal Botany (selections) Native Medicinal Plants

Week 8 Enlightenment Medicine and the Environmental Subject
Discussion: Where does the argument come from that the American environment could produce morally superior beings to the European environment. How can Nature produce humans who are morally and physically superior to those in crowded “civilized” (European) cities? In what way does contact with the Native Americans affect this concept?
Readings for Week 9:Barbara Duden, The Woman under the Skin (selections); Barbara Stafford, Body Criticism

Week 9 Experiences of the Body
How were perceptions of the human body formulated through the 18th century and how did they change? By examining patients’ accounts of illness to their doctors and comparing it to the anatomical drawings and models of the medical establishments in Europe and America, we will attempt to reconstruct a phenomenology of the body that can be mapped onto the work that we did two weeks previously.
Start working on maps

Week 12
Over the last three years students at Bucknell have worked on compiling interviews with people in the Marcellus Shale drilling area to talk about the effect (potentially negative and positive) on their lives and the lives of their communities. Their work can be found at Bucknell Environmental Center—Stories from the Marcellus Shale
http://susquehannawritersinstitute.blogs.bucknell.edu/
In addition, Simona Perry will speak to us about her work:
“Playing for Keeps along the Susquehanna: A Community-Integrated GIS of Land and Water Uses and Rights in Rural Pennsylvania’s Marcellus Shale Natural Gas Play” Final Report, Dr. Simona L. Perry, Gettysburg College. She writes: “Attached you will find the Final Report on the participatory mapping project I undertook in Bradford County over the last two years. This project was funded by the Mellon Foundation and Dickinson College. As the development of the Marcellus shale and other shale plays in Bradford County and the region continues, the work of systematically documenting and analyzing how these developments are impacting the quality of life of agricultural landowners and their families must also continue. This project is just the beginning of what I hope will become a long-term community monitoring/change study of unconventional shale gas development’s impacts on the rural places and people of the Endless Mountains. Please feel free to share the attached report with others. I welcome feedback, comments, and collaborators!”
What are the ethical problems raised by the question of whether to lease land for drilling or not? How do these concerns relate to the notions of land, place, body, and stewardship that we have studied so far?
Paper 3: Response to Marcellus Shale issues