Joseph Shippen’s 1756 Map of the Susquehanna 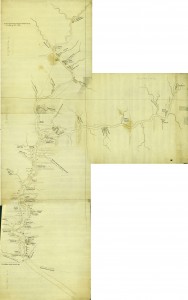 In the confusing and complex times after the outbreak of the French and Indian war in 1755, the Susquehanna River became an important marker of spheres of influence between the British and the French in Pennsylvania. The confluence of the two branches of the river marked Shamokin, where from 1747-1755 Moravian missionaries had lived alongside Iroquois, Delaware, and Shawnee, and had developed warm relations with such influential figures as Shikellamy, the Oneida sachem to the area’s Iroquois as well as regent of those Native peoples, who had been displaced from the more southern areas around the Chesapeake Bay. The presence of the Moravians at Shamokin might explain the existence in the Moravian Archives in Bethlehem, Pa, of a four-piece manuscript map of the Susquehanna River, drawn by Joseph Shippen around the time of the building of the fort system along the river. The map accurately marks the route that Colonel William Clapham and 400 troops took in July 1756 from Harris’s at the mouth of Paxton Creek up the eastern shore of the river to Fort Hunter, Fort Halifax and then on to Fort Augusta. The map also traces the water route the canoes and “bateaux” took, laden with provisions, trying to avoid the dangers of the rapids, falls, and riffles. To this end, the map details with great accuracy the myriad river islands and obstacles that such a flotilla had to navigate.
One other copy of Colonel Clapham’s March to Fort Augusta can be found in the Pennsylvania State Archives (MG 11-Map Collection: Map105. [Map of Col. Clapham’s March to Fort Augusta, c. 1756, by Joseph Shippen] which describes the map as follows,“Begins at Harris’s near Paxton Creek, past Fort Halifax to Fort Augusta. Then up the East Branch of the Susquehanna to Nanticoke Town and Mamuncis[?] Town. Shows the West Branch of the Susquehanna to and past Shonemahone. Original, hand drawn in 3 colors. Laminated, 8 sections.” Why an original of this map of primarily colonial military interest should be in the Moravian Archives “Moravian Archives, Drawings and Prints, f.037.10-13” is unknown. However, the detail and condition of this version of Shippen’s map mark it of paramount interest to researchers focusing on the fascinating confluence of not only the Susquehanna River but also the Native and Colonial settlers along its shores in the mid-eighteenth century. (Katherine Faull, Program in Comparative Humanities) – Katherine Faull

The four parts of the map were scanned at high resolution and then stitched together using Adobe Photoshop. Place names were also added, where possible. This work was done by Emily Bitely, ’11 as part of a summer internship at Bucknell University. Map is reproduced with the permission of the Moravian Archives, Bethlehem, Pennsylvania.